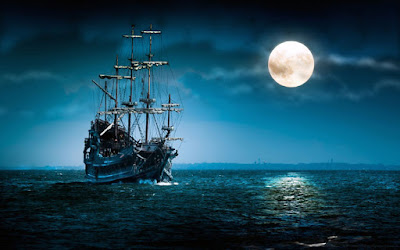 Here is the second flash fiction related to my blog image.

Jenny walked along the shore, wiping the tears from her face. They fell aster than she could swipe them away. She wasn't even sure how she made it down to the beach. She tried to focus on the feel of the sand slipping between her toes. Where were her shoes? She glanced down to see her nightgown fluttering in the sea breeze. Strange that she would wander around in her sleepwear. She looked back toward the way she had come. The lights from Castle Montague glowed brightly in the windows. Did anyone miss her or even notice she had left the grounds? Not that she cared, having no intention of marrying the Duke of Rutherford. She would run away before she would endure than horrible man's touch. It was the twentieth century for God's sake! Who arranged marriages anymore?

Jenny froze. She recognized that deep sexy baritone, but hadn't heard it in so long. Or was it from a dream? She took a shaky breath and turned to face the man who had seemingly appeared out of nowhere. It was dark and she couldn't see him clearly. "Do I know you, sir?"

"Know me? I am wounded." He sounded sad.

"You called me Geneva. My name is Jenny."

"You don't remember do you, my love?"

The clouds parted and the full moon shone down on her mystery man. She gasped. He had the most handsome face she had ever seen, rugged but gentle. He was tall and broad, lean and muscular. His dark wavy hair just brushed the collar of his shirt. She couldn't tell the color of his eyes, but they were smoldering, like he was trying to see inside her soul. His style of dress seemed out of place, like a costume. There was something familiar about him, but she just couldn't place him.

He held out his hand to her. "Come. You will remember in a moment."

She felt no fear and reached out. The moment their hands touched she was assaulted by memories of their life together. Not just one life, but many lives. They had been together over and over throughout time. She gasped and would have collapsed from the shock if he hadn't caught her in his arms. "Christoph," she breathed. "How are you here?" She feared the answer even as she recognized the truth.

He nodded. "You were running away and fell." He pointed toward the castle. No, not to the castle itself, but the cliffs. She saw a bit of white fabric rustling over the edge of an outcropping.

Sadness consumed her, but then she realized something. "Why were we not together in this lifetime?"

He smiled. "My time on this earth had been played out. I have been patiently waiting for you. I am a guide, here to help you cross over."

"So we will never be together again?"

"Actually, we can be together for eternity if you so desire." He directed her gaze out over the ocean. A beautiful ship appeared, its sails billowing in the wind. "You can be my helpmate. Our purpose will be to assist other souls cross this ocean to their new life. It is not always easy, as some do not wish to leave. Perhaps it will be easier if we share the burden."

There was no hesitation. "Yes," she said and was wrapped tightly in his embrace. She squeezed her eyes shut and when she opened them again they were on his ship staring back at her old home. As they sailed away and her old life grew smaller she felt nothing but hope and joy. She looked forward to helping lost souls.

Posted by Callista Briars at 10:29 PM